When paying for tuition for years on end I found that be willing to wait can be an ally.

We are going camping soon and usually it’s a school thing (includes tents). But this outing is a separate tent and we needed some gear.

Reviews of the low end tents revealed they are ok unless it gets windy or rainy. A wet tent would not be good for little (or big) people so we wanted to upgrade. Car camping tents can become really expensive quickly. And each night not in a hotel sort of pays for itself.

What we wanted it the glorious 6 persons REI Base camp tent. Ventilated awesomeness. With a footprint and tax it comes in a very reasonable $500. However, we aren’t reasonable. We are paying for private school. So I kept an eye out for a week, and then weeks, and then months. Prices would vary but even on Ebay the used ones were going $300+ something. They must be great tents. We spent weeks looking for one to rent from numerous places (check out lowegear.com if you camp).

Didn’t work out. We really wanted that one. But we have since learned it can be productive to be ok with second place. REI (who we like to support because of their fantastic educational programs and supporting community and the natural environment) had a two week only sale in the spring – 25% off on goods upon check out.

They only had one tent for sale with that would comfortably fit us – a Big Agnes. The reputable brand had a model with good, but somewhat mixed reviews. It was presumably on the way out for improved models so it was 25% off. After further reading I realized it wasn’t selling because bad reviews were being posted about that actually referenced a previous model. So this was an excellent tent and more than we needed for basic car camping and was small enough to serve for other trips as well.

Curious, I put the tent in the basket and saw and additional 25% off. This sucker, new, we being dumped because of mistaken reviews (or REI needed to clear inventory, or both).

It was cheaper to buy this tent new than rent the exact same model. By being patient, and flexible we were able to get an excellent tent for a price that didn’t bust our budget. 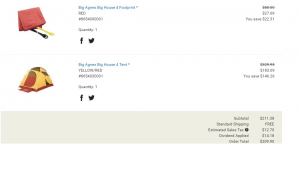 Not a camper? It is low cost adventure option. The long weekend we have planned would have been $600 in hotel costs alone – it is much less money to camp for this particular outing.

Vacations are for wimps

An ode to Peapod