My investing hero is Anne Scheiber. She built a great portfolio on an average salary and then gave it all away to charity (for education, of course).

She didn’t follow the recommended path and she took a lot of criticism  for it in the press when the bequest became public. They only  wrote about it at the time of her death because she was able to give away $22 million  despite starting investing later in life and never having a high salary. 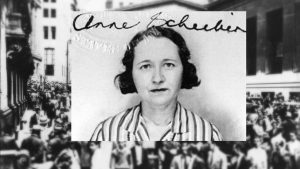 It will come as no surprise  the pundits were critical of her life choices and her investing style. The put their values on her life – “she should have spent more on herself” – perhaps a nicer place or a personal jet! The idea of living with less to provide resources for someone else (exactly what parents paying for private school are doing) doesn’t even occur to them as perhaps worth the modest life style. Nor do they consider that a modest life style in of itself has value (simplicity, environmentalism, community).

Her investing style was and is quite unique and wrong by everything we ‘know’. Most writers overlay other models they already know to explain the results (which is incorrect) because they don’t have the time to understand what she actually did. Sort of like how financials experts write today that one *must* own your house to do well and anyone who accumulates wealth without the house managed to overcome that deficiency. This despite the many counter examples (which are brushed aside as anomalies). I will admit to studying Anne investing style since 1996 in an effort to reverse engineer it.

1) She never paid a single mutual fund cost which helped and focused on low brokerage costs.

2) She was a focus investor and saved for years, invested for five more years and then put all of that money ($10,000  – years of salary at the time) into a single stock (Schering-Plough, later purchased by Pfizer) .

One should never do that right?

It was worth $7.5 million when she died – a 750 bagger on that investment alone.

3) She gave it all away to help remedy the inequality she experienced. This was made a big impact as the dividends when she died were over $800,000 annually.

4) Folks write about her as though she bought blue chip dividend stocks stocks which is not entirely accurate. She had a much more nuanced approach including owning MCI and Apple computer when they were relatively new companies.

She lived simply and did it her way. Your way might be different and that is ok. Don’t accept those who use existing frameworks to describe all behavior.

Who should go to a private school?

Investment pick of the month- Smuckers!