Food is  a big portion of household spending. You probably think you want me to cut expenses drastically here as well. Nope.

You have enough income to consider private school so most likely you have a two income household where everyone works in competitive and draining jobs. And now I am asking you to think about cutting costs and to take regularly repeated actions. This takes a lot of energy and a clear mind.

Going for the pancakes instead of an egg white omelet with mushrooms and peppers because the pancakes are a fraction of the cost makes sense right?

Not always. Paying for private school means developing your children to their full potential. And that applies to you as well. Some things make sense to pay more for and actually ending up costing less in the long run.

Pancakes, for example, can cause a temporary spike, and insulin rush, a crash and then a fuzzy fog hours later. We need you to have steady and calm energy all day and then in the evenings, after a long commute, feeling like you could be productive. That way you will have enough energy to do some money saving record keeping after a full day at work. Slow and steady wins this race. Eat whole foods.

You will find your food costs might go up a little but your energy levels become a steady fire once you drop the spikes associated with sugar and ultra refined flours. Soon enough, after a ten hour work day followed up by dinner and dishes, more work will be quite simple and enjoyable. This is an investment in yourself, just like private school is an investment,  and will soon pay for itself many times over as your steady energy enables you to do more.

Don’t worry. You come from a long line of people who worked from dawn until dusk six days a week.  All you need to do is eat like them. Don’t eat anything your great 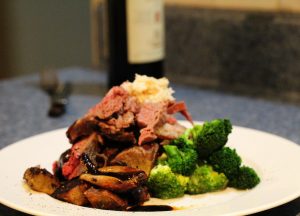 grandmother didn’t eat. If the dish appears to be traditional eat that – most likely it is mostly vegetables with a protein mixed in and sometimes a whole grain. Do this for a week for each meal and prepared to be amazed.

And when you are outside your dwelling some evening because there is something you need to do to save money and because you eat well you will have the energy to do so. You will invariable notice the soft glow in the windows nearby just sitting around being passively entertained. At first this will be alarming. Eventually you will realize you are playing a game where only a few are even showing up to participate.