Paying for private school can be challenging but savings can be found in the most unusual places.

A broad category of savings is in that of repairing instead of replacing. The awesome Patagonia company (buy their stuff – it lasts a really long time) has a marketing campaign called “Repair is A Radical Act”.

Their focus is on the incredible environmental benefits of first looking to repair items before deciding to replace them. It’s also cheaper for you. Here at Paying for Private School we do it to save three environments: a child’s, a private school whose values we resonate and the world at large.

A tale of two tables

When we bought our  current home ten years ago and the patio furniture conveyed with it. Not because the previous owners thought it would help sell the place but because they didn’t really want to take it with them. Nor would the table have survived the trip. Low on cash we took this rickety table and continued to use it for a decade. Over time squirrels also used made use of the furniture to sharpen teeth and claws. Bits of sharp wood were sticking up on the surface. It had come unscrewed and it was time to be replaced. Ominous squeaking sounds omitted  from the gray thing every time we sat down on it. 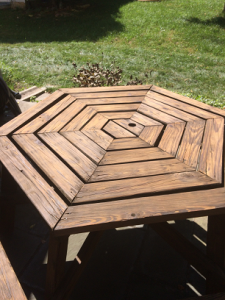 Believing repair as a radical act  I bought a $24 palm sander and learned how to use it on an unsuspecting wooden cutting board that had broken in half early in the week.

Armed with below-novice knowledge, a sander, a hammer and low expectations, I hammered the nails back in, sanded it and re-stained it with a protective outdoor stain. For about $80 bucks in total I now have a table that would cost $300 new. And I get to keep the sander should I need it again for some future project.

And I saved $220, we learned a new skill (a number of us took a go with the sander) and delayed the need for a new table to be created, stored, marketed, shipped and sold. In the short term this will help us pay a tiny bit of the tuition  bill and over the longer term, in aggregate, this will result in less stuff being created from the natural world. One table is enough.

You can do this too and start saving money *and* the environment.

Repair is a radical act.

Don’t Retire. Do This Instead.