There is a mathematical model that joins space and time into a continuum. The physical manifestation of this truth is the rate of time  observed depends on an objects velocity relative to the observer[1]. 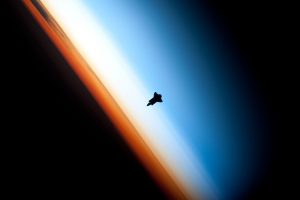 This theorem is also the basis for the original planet of the apes movies (must see!) where Charles Heston and his costars were flying really fast for a bit and when they return home, planet Earth had experience thousands of years where they experience only a few. And during that time difference the Apes took over. Not intuitive but that is how space-time works.

The Money Space Time Continuum is the similar and indicates that the lowest cost route is often also the fastest route to accomplish something. Cheapest should be slowest, and it often is, but not as often as one would expect.

Here is an example; I trod around the carpeted office  space in dress shoes. I eventually found out that I was replacing low cost shoes every six months. So a switched to higher up front cost Allen Edmonds  which are not only the greatest shoes in the world they also have a lower cost per use.

Being clever (or so I thought) I picked up a pair of factory seconds Road Warriors for a fraction of the cost of regular new shoes. Usually a factory second has some minor unbelievable small defect – like a small nick or tiny 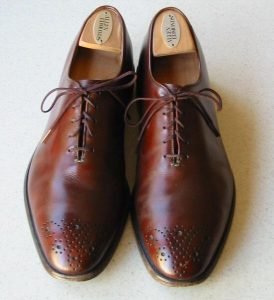 discoloration that only an expert can see.

Not in this case. These factory seconds squeaked. And I mean duck—honking-loud-all-day-long. I figured they just needed to break in. Weeks later I realized this problem was here to stay and it was starting to raise eye brows as work.

No problem – factory seconds don’t quite meet the high standard of the fine Allen Edmonds Shoe Company.  They are low cost and usually still better than regular dress shoes but occasionally you will get a dud. Time to watch for a sale and drive to a shop to replace them. Their stores are really far from me so it was going to be an all-day affair that I was dreading.

And then I remembered the Money Time Space Continuum. This theorem that I just made up (but others have observed and reported on) states that the lower cost solution is often faster. And the low cost option is to repair stuff.  I rushed online to see if anyone else in the world ever had squeaky shoes and if so, did they invent a way to fix them? I am not the first and apparently the solution was to add baby, talcum or baking powder under the insert and where the leather touches. This does two things – absorb any moisture and lowers the coefficient of friction between contact points resulting in noise free movement. Being the proud owner of talcum powder I distributed it liberally in the all the hidden squeak zones. The next day I walked the halls of my office complex in Ninja like silence.

I save the trek to the store and the after tax hours of labor to pay for a new pair of shoes. Hours, stress and the environment impact saved by remembering the Money Time Space Continuum.

Before you have to take a bunch of time to spend a bunch of money – stop and consider alternatives. Often you will end up with time saving alternatives that keeps more cash in your pocket.

Have fun while saving money!